According to new research by Accenture, the Russia-Ukraine war is sparking ideological rifts between ransomware groups that could significantly impact Western critical infrastructure.

Before Russia invaded Ukraine, cyber threat actors were largely transnational and financially motivated. In a new shift that Accenture describes as “unprecedented,” these groups are siding with Russia or Ukraine and becoming politically motivated, akin to hacktivism.

According to Accenture, pro-Russian actors are targeting resource, utility, government, media, finance, and insurance entities for their function in Western-imposed sanctions and perceived value as critical infrastructure.

The ransomware groups LockBit, CoomingProject, and Conti have openly expressed their support for Russia. However, these declarations have backfired, at least for Conti. Four days into the war, a Ukrainian cybersecurity researcher leaked a year’s worth of Conti’s internal data. This included the Conti’s internal chat logs—which linked them to Russian intelligence agencies—as well as details on the group’s infrastructure, logistics, tooling, and zero-day exploits.

Shifting from opportunistic financial gains to political motives creates a higher threat level for the West. According to Accenture, this is because:

Additionally, the situation is also provoking pro-Ukraine hacktivist groups like Anonymous. Ruthless attacks against critical infrastructure on either side could have significant, unpredictable, and potentially dangerous impacts on governments and civilians. 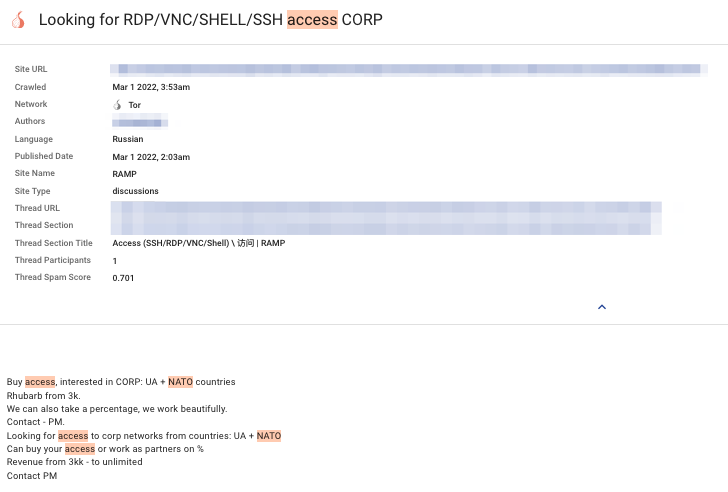 The cybersecurity landscape is rapidly evolving. Governments need to monitor potential risks to their critical infrastructure in the coming weeks and months as the war evolves.

Researchers at Accenture have illuminated emerging risks by accessing cyber threat actor communications on underground forums. These primarily operate on the dark web, which is clunky and dangerous to access without the right software.

To learn more about OSINT and the use of OSINT tools in the Russia-Ukraine war, contact us today.