Concerns About a Nuclear Disaster in Ukraine Escalate

The International Atomic Energy Agency (IAEA) has reiterated warnings this week about Ukraine’s Zaporizhzhia power plant after recent visits to the facility.

The IAEA, a UN watchdog, described the situation as “unprecedented,” expressing an urgent need for a security protection zone surrounding the plant to prevent a nuclear catastrophe. The UN Secretary-General Antonio Guterres echoed this demand, calling for a demilitarized perimeter for the nuclear power site.

The Zaporizhzhia plant is located in southeastern Ukraine, on the Dnieper River, 550km from Kyiv. The plant was taken by Russian forces a week after the invasion on February 24th and is still operated by Ukrainian staff under Russian guard. The plant has come under attack since the beginning of the conflict with accusations from both sides.

On Monday, the company that runs the plant stated that the last line connecting the plant to Ukraine’s energy grid was disconnected due to damage from shelling. According to a senior Ukrainian official, damage from fighting means that the plant is only generating electricity to power its safety systems, which normally rely on external power.

Russia’s invasion of Ukraine marks the first time in history that a military conflict has happened in a country with such established nuclear infrastructure. The Zaporizhzhia plant, Europe’s largest, was opened in the 1980s and houses six reactors that generate half of Ukraine’s nuclear power—more than any nuclear facility in the United States.

Experts say it’s hard to predict possible outcomes if shelling damage caused a nuclear disaster. However, it’s not just direct damage to the plant’s reactors that could release radiation, but damage to its cooling systems and waste silos.

Oleh Korikov, Ukraine’s acting chief inspector for nuclear and radiation safety, has stated that further disruptions to the plant’s power source could force it to rely on backup diesel generators. This would mean transporting four trucks’ worth of fuel daily to the plant amid fighting. Running out of diesel would impact the plant’s ability to cool, causing a meltdown that could initiate a catastrophic radiation release. According to chemical weapons expert Hamish de Bretton-Gordon, silos of nuclear waste surrounding the plant could also cause nuclear contamination if damaged.

If a large enough disaster occurred, nuclear contamination would likely spread beyond Ukraine and carry radioactive material down the Dnieper River to the Black Sea. This could destroy that region’s fishing industry, impacting surrounding countries including Romania, Bulgaria, Turkey, and Russia.

Since Russia invaded Ukraine, we’ve talked extensively about how OSINT has played a role in the war—from investigating war crimes to understanding regional public sentiment and information operations, as well as tracking military infrastructure and other ground-truth activities. In the age of social media, anyone on the battlefield with a mobile device essentially becomes a battlefield sensor, providing public social media content in real-time.

This could be a valuable tool for intelligence teams and organizations monitoring Zaporizhzhia, providing a closer look at on-the-ground activities in and around the plant, as well as damage to the plant itself. 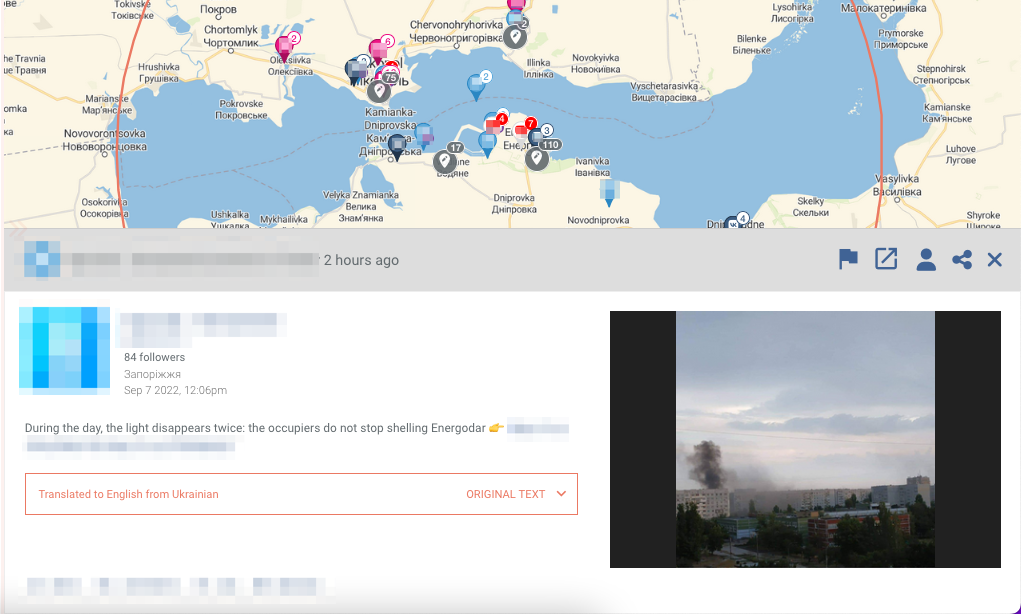 A public social media post, translated from Ukrainian, showing an image of shelling near Energodar near Zaporizhzhia—discovered with the Echosec Systems Platform.

To learn more about OSINT solutions, practices, and data sources supporting conflict monitoring and other geopolitical applications, book a call with Echosec Systems.